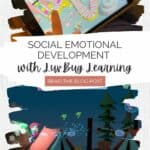 Teaching our kids social emotional skills that help them understand themselves and empathize with others better is one of the most important things we can do for them. Unfortunately, it’s often easier said than done. Our family recently discovered and tried out the new LuvBug Learning app, consisting of several high-quality social emotional development activities for kids. Here’s what we thought.

I received access to LuvBug Learning for review purposes and I was compensated for my time. I am not required to leave a positive review and all opinions are my own.

Several years ago, after reading Debra Bell’s Ultimate Guide to Homeschooling, I created a mission statement for our homeschool based on ten overarching goals I have for my children. I revisit these goals thrice yearly—once when making our plans for the year, and once for each of our two required reporting periods. I track how well we’re doing with these goals and the activities we’re incorporating to help us reach them. For those of you familiar with my goal-setting obsession, I’m sure this comes as no surprise.

The content of these goals, however, might surprise you. Though we are an academically-oriented family, only one of our big goals has to do with academics in the traditional sense. Yes, we want our kids to study hard and achieve academic success, but far more critical are the attitudes and characteristics they develop and the relationships they form with each other and the world around them.

We want them to become self-aware individuals, who understand their own emotions and feelings and who care about the emotional well-being of others. We want them to have a growth mindset, to know that their efforts to grow and develop as people will pay off. And we want them to build positive relationships with each other, with us, and with others in their community.

In short, we are significantly invested in their social-emotional learning (SEL).

What is Social-Emotional Learning?

The Collaborative for Academic, Social, and Emotional Learning (CASEL) defines social-emotional learning as “the process through which all young people and adults acquire and apply the knowledge, skills, and attitudes to develop healthy identities, manage emotions and achieve personal and collective goals, feel and show empathy for others, establish and maintain supportive relationships, and make responsible and caring decisions.”

It starts with building self-awareness and the ability to understand and manage one’s own emotions and behavior. As kids grow in these areas, they are better equipped to identify, relate to, and respond to the emotions of others. This emotional intelligence builds social awareness and leads to stable and healthy relationships with others. It also guides children in responsible decision-making.

﻿How Do We Teach Social-Emotional Learning to Kids?

As with any skill development, observation and emulation are key components of social-emotional learning. Kids learn from watching us. The more we model relationship skills such as empathy, active listening, and effective communication, the easier it is for children to progress in these traits naturally.

However, we can also use social emotional learning activities to encourage the development of these skills in different ways. For example, keeping a gratitude journal, practicing mindfulness, and doing a feelings check-in regularly all help kids tune into their own emotions and those of others.

Playing games is another great way to work on new social skills, one that can not only have a positive influence on their mental health but also give them the language they need to communicate their thoughts and feelings.

Many kids learn best through play, especially when the games they have access to are highly engaging. By incorporating social emotional development activities into intriguing, interactive games, we create an environment where kids want to hang out because it’s fun and where they hear positive messages that influence their view of the world around them and the people in it.

LuvBug Learning has recently released its stunning new app that strives to do exactly this.

Designed specifically for parents who are concerned about introducing their kids to the crazy world of technology, LuvBug offers games and educational videos filled with social emotional goodness.

What is LuvBug Learning and How Does it Work?

When kids first open the app, they can choose between playing a game and visiting a village. The villages offer a more challenging game where kids must navigate a multidimensional environment where they hug jellybeans and shoot love bombs at their enemies.

While there are just six games and three villages right now, each one of these has multiple themes you can select for them (sometimes up to 40 themes), creating an array of different options. Also, there will be another 6-10 games added in the next six months as well as seven more villages.

The backbone of the LuvBug learning program is its games. Kids can choose from six different options. Here’s a quick overview of each game:

As kids move through the games, they will get a pop-up screen every few minutes prompting them with a social emotional learning question.

Kids have to choose carefully to get the right answers, but fortunately, they’re not on their own. LuvBug provides little supports for them. For example, kids who aren’t yet reading on their own can click on the green question marks to hear each word and its definition (These can also be helpful for those who do already read).

As the kids move up in age levels (there are five levels, ranging from 5-6 to adult), the questions get a little more challenging and they are given four choices instead of three.

LuvBug also includes a video library. They currently have about thirteen of these videos, but they are adding a new one every week. Their goal is to have 120 videos in total, so all of them should be released within the next two years.

Each video is between 2.5 and 5 minutes and covers a single social emotional topic. They have stunning quality graphics for a video game and feature a short story where two characters walk through a scene and discuss the meaning of the focus word.  I love how this models friendship and the important conversations that friends can have with each other.

LuvBug supports proactive parenting, equipping kids with essential life skills. The parental dashboard gives you full control and oversight over your children’s use of the app. From here you can:

What Our Family Loves About LuvBug Learning

I was surprised by how much my kids gravitated toward LuvBug. Not just my younger two, as I’d expected, but my teenagers as well. No sooner had I installed the app on our iPad than they also start clambering over each other to get a turn playing the games.

I thought the enthusiasm would wane pretty quickly, but it didn’t. All four of them could not get enough of it, though their reasons for loving it differ. For my youngest (five years old), who hasn’t really played many video games before, LuvBug is a fun activity that challenges him, while also developing his hand-eye coordination and his ability to use a touchscreen.

My eight-year-old enjoys all the different themes and strives to earn as many points as possible so she can be rewarded with puppy kisses and extravaganza rounds.

For my teens, the connections go deeper. While the social situations presented to them through the app’s SEL curriculum are not challenging for them, they appreciate the vision of the app and what it aims to do. My eldest daughter said it gives her warm feelings, calms her down, and reminds her of childhood. She loves how overwhelmingly positive everything in the app is, from the way enemies are hit with love, rather than with weapons to the way users are randomly given positive messages (such as “don’t forget how many people love you.”) She even pointed out some of the safety features incorporated into the game’s design, such as the use of a ladder rather than jumping down from one level to another.

As a parent, I appreciate the high-quality design of the game, the way it’s able to capture all of my kids’ attention, and the positive messages it’s sending. I especially love the short videos that teach kids the meaning and implications behind important concepts like fairness, honesty, and the golden rule.

If you have kids between the ages of 5 and 12, and you’d like to offer them an alternative way of using and engaging with technology, check out LuvBug and its social emotional development activities.

For a limited time, get an annual membership from LuvBug Learning for just $5/month using coupon code LUVBUG5 (expires Oct 15, 2022). Although LuvBug offers promotions throughout the year, $5/month is a considerable savings beyond any promos.

Get Ready for College with These SAT and ACT Prep Courses

Finding Your Core Motivations: Discover What Motivates Your Tweens and Teens